Hidden Figures is a 2016 American biographical drama film directed by Theodore Melfi and written by Theodore Melfi and Allison Schroeder.  Hidden Figures is based on the non-fiction book of the same name written by Margo Lee Shetterly about small group of black female mathematicians and aeronautical engineers who worked during the early days of the National Aeronautics and Space Administration (NASA) in the 1950’s and 60’s during America’s race to space with the Russians. 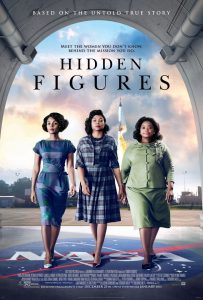 Hidden Figures follows a group of African American mathematicians and aeronautical engineers working for NASA in the Computer Department.

“Meet the women you don’t know, behind the mission you do”