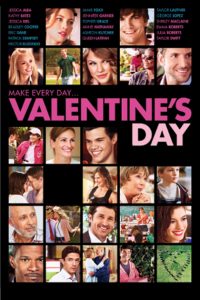 Valentine’s Day follows a couple dozen people as they win and lose love in all its many forms over the course of the romantic holiday.

Garry Marshall assembled a star studded ensemble and intertwines multiple story lines together taking you on a fun adventure telling stories of love in all its forms.

“A Love Story. More or Less”